Since writing this article, there is a large guide on offshore agencies, jobs, how to get them etc, once you are done here, check out the Offshore Survival Guide page.

Jobs are completely open for women in Oil and Gas, if you are a woman who wants a well paid technical professional then the time is now. Working offshore is safer than ever, behaviour offshore is very courteous, there is no tolerance for bullying, unsafe acts or animosity.

It is still not very common to see women offshore. It is about 1-3% it is really low. Men also would like to see more women offshore, it changes the dynamic and feels friendlier.There is never been a better time to be a woman; thanks to positive discrimination woman will get oil and gas jobs easier than men.

Every big company wants to show how diverse they are, and that they do not discriminate, however, technical oil and gas jobs are still so heavily male-dominated. Maybe 'male-dominated' is not the right wording, technical work offshore is still 'unattractive to women'! - or that is how is seems.

Oil and Gas incentives for women

A decade ago I was studying engineering, to promote more woman in engineering my university were giving laptops and $1000s in cash to girls if they studied to be in oil and gas. There were grants and internships open for women who wanted them, but there just isn’t enough woman applying for them. There should be more women offshore, and hopefully, this article might persuade a few more. 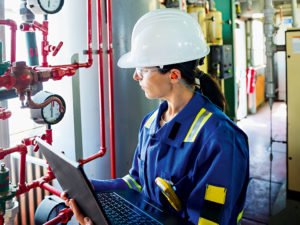 It doesn’t exist, I have worked in the UK, Middle East and Australia, Africa, and Asia, and no-one would step out of line. If anyone behaved in a sexist manner or showed signs of harassment they would be on the first chopper home, lose their jobs and be blacklisted on oil and gas registers. It is just not worth it for anyone who may still holds an archaic, patriarchal mindset.

Woman if anything are respected more and hold even higher value, as there are not many women offshore, and men definitely appreciate seeing and enjoy having the occasion conversation with a woman, a month offshore without seeing the opposite sex is not good for anyone.

The true answer is anything you want to do, but the more general answer is jobs that are not so physically demanding as woman are still not as attracted to those jobs.The most common positions for women offshore are:

These are the usual positions you would see women offshore, I have yet to see a female sparky, or a female pipe fitter, I did meet one pipeline testing technician and also a pipeline pressure testing supervisor but is very uncommon! I have however worked with many female engineers who run their own projects with several people under them. Some of those female engineers have everyones respect, some don't, the same as it is for men.

So what are the best paying jobs? Well this actually changes from country to country. In Australia for example, the stewards who change your sheets and help with catering, were getting paid more than most of the engineers due to their powerful (and messed up) union laws. Some cleaners were making over $1000/day, how crazy is that…

The best return on your educational investment combining with low physical labour requirements, the best job to aim for is HSE jobs. By getting your NEBOSH certificates then you can earn a nice 5 figures/Offshore month, and get there reletively quickly.

Do you want to hear more about NEBOSH and what is involved? Please write the words 'HSE' in the comments box and press send - that way we can measure response.

Even more good news for a female oil and gas to-be. Offshore you will share a room with someone of the same sex, if that is not available then you will get your own room. There are separate changing rooms for men and woman. And for social, legal and primal biological reasons, the men offshore will be very nice to you.

Are you a hard working woman and earn good money doing it, working offshore may be perfect for you, go for it!

Learn more about the BOSIET/HUET.

Share to your friends, or send us some information on your experience as a woman offshore - [email protected]

This website uses cookies to improve your experience while you navigate through the website. Out of these, the cookies that are categorized as necessary are stored on your browser as they are essential for the working of basic functionalities of the website. We also use third-party cookies that help us analyze and understand how you use this website. These cookies will be stored in your browser only with your consent. You also have the option to opt-out of these cookies. But opting out of some of these cookies may affect your browsing experience.
Necessary Always Enabled
Necessary cookies are absolutely essential for the website to function properly. These cookies ensure basic functionalities and security features of the website, anonymously.
Functional
Functional cookies help to perform certain functionalities like sharing the content of the website on social media platforms, collect feedbacks, and other third-party features.
Performance
Performance cookies are used to understand and analyze the key performance indexes of the website which helps in delivering a better user experience for the visitors.
Analytics
Analytical cookies are used to understand how visitors interact with the website. These cookies help provide information on metrics the number of visitors, bounce rate, traffic source, etc.
Advertisement
Advertisement cookies are used to provide visitors with relevant ads and marketing campaigns. These cookies track visitors across websites and collect information to provide customized ads.
Others
Other uncategorized cookies are those that are being analyzed and have not been classified into a category as yet.
SAVE & ACCEPT